The soil moisture response to the heavy rainfall was captured nicely by NASA’s Soil Moisture Active-Passive (SMAP) satellite Level 2 retrieval product of 0-5 cm volumetric soil moisture for the early morning overpass across the Central U.S from 9 March (Fig. 2a).  Very high retrieved volumetric soil moisture of 0.45 or higher is seen from eastern Texas across much of northern Louisiana and southern/central Arkansas, aligned well with the areas that received the heaviest rainfall.  The corresponding SPoRT-LIS modeled soil moisture analysis for the 0-10 cm layer of the Noah land surface model (Fig. 2b) shows a reasonable agreement with the SMAP retrieved soil moisture but with slightly less dynamic range than the SMAP data — a reasonable result given that the SMAP retrieval is valid over a shallower, near-surface layer than the LIS top model layer. 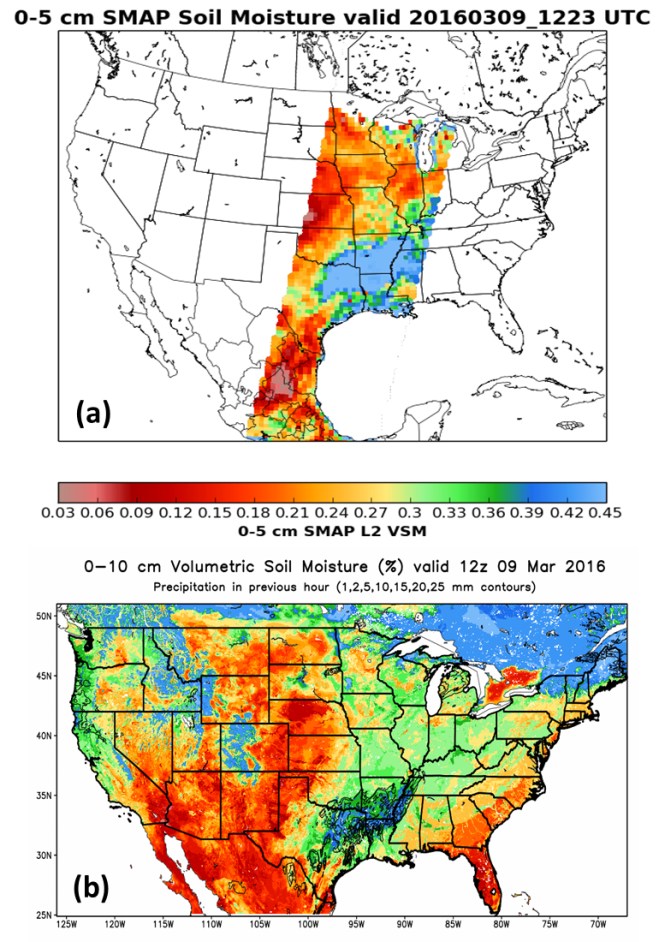 The SPoRT-LIS total column relative soil moisture (RSM) has been found to qualitatively correlate with areas of river/areal flooding when exceeding ~60% across northern Alabama.  The depiction of total column RSM from the early morning of 10 March shows a large area exceeding 65% (blue  shading in Fig. 3a) across eastern Texas, northern Louisiana, and southern/central Arkansas.  The weekly change in total column RSM (Fig. 3b) highlights the regions that experienced the largest increases in soil moisture in response to the heavy rainfall.  As the soil approaches saturation/field capacity, most new rainfall goes directly to runoff, thereby exacerbating the flooding situation.

Another product available from the real-time SPoRT-LIS is the total column RSM percentile, which shows how anomalous the current soil moisture conditions are relative to a historical, 33-year climatological database of modeled soil moisture. The percentile product from the morning of 10 March (Fig. 4) shows that areas of eastern Texas and northwestern Louisiana (and a few other spots) exceed the 98th percentile for the current day — indicating that these present-day soil moisture values are about the most moist it has been in the last 33+ years for 10 March.

Notice that there are a few anomalous “bulls-eyes” of dry percentiles in southern/eastern Arkansas.  These areas are caused by corrupt input precipitation data driving the SPoRT-LIS land surface model simulation.  The issue is currently being corrected by the operational organizations managing the rain gauge input.  However, it should be noted that SPoRT is working to implement near real-time data assimilation of the SMAP Level 2 soil moisture retrievals into its LIS simulation.  Routine assimilation of SMAP satellite soil moisture will help correct anomalies caused by poor input precipitation, thereby resulting in more robust soil moisture analyses for situational awareness and disaster-response applications.

Finally, the areas of active flooding at U.S. Geological stream gauges and the NOAA/NWS flood watch/warning map are given in Fig. 5 for the afternoon of 10 March.  The axis of flash flood warnings (dark red color) aligns quite well with the total column RSM percentiles exceeding the 98th percentile in Fig. 4, whereas the broader footprint of all flood warnings/watches corresponds closely with the total column RSM above the 65% value (blue shading in Fig. 3a).