If you are near the Gulf Coast, you’ve probably gotten a little drenched over the last few days. In fact, there have been reports of floods and flash floods as a result of the days of heavy rain developing off the coast and moving inland. This season, SPoRT is assessing a new suite of precipitation products derived from NASA’s GPM mission: GPM passive microwave swath rain rates and IMERG, a morphed rain rate product that is available every 30 minutes and also in accumulations. For those of you who aren’t readily familiar with passive microwave rain rate products, here is a quick key point. Passive microwave really shines where our WSR-88ds are totally in the dark, namely over the oceans. Here are some screen captures of the new precip products on AWIPS.

The accumulated IMERG products are helpful to determine how much rain has fallen in radar- and gauge-void regions. According the IMERG 24-hr accumulation estimates (lower right panel), greater than 4 inches of rain had fallen in the 24hr period ending in August 9 at 12Z just south of Tallahassee along the coast and another 3+ inches had fallen south of Melbourne. Just off the coast, there were pockets of 8 and even 12 inches of total rain fall in 24 hours, according to IMERG. 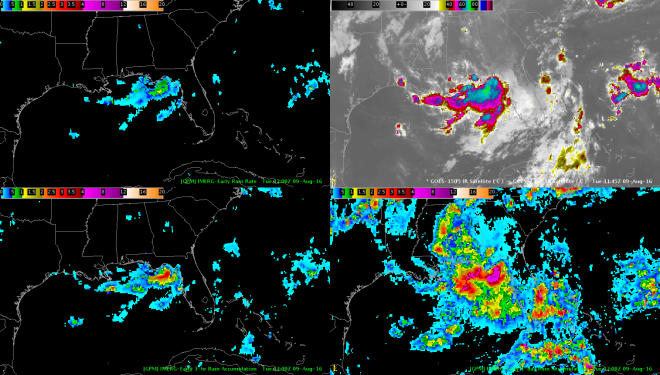 The instantaneous rain rate product, shown in the upper left in the above image, can be compared to IR or other imagery or observations to help highlight areas with the heaviest rain fall. Passive microwave is especially sensitive to precipitation-sized ice, so it points out the locations of strong convective updrafts within the larger system, whereas IR is sensitive to the cloud tops and can miss some important components of storm development that lead to heavy rain. Note on the animation below that although the rain rates corresponde well the IR imagery, as it should, the locations of heaviest rain are not always the locations with the coldest cloud top temperatures.