The VIIRS Day-Night Band (DNB) RGB imagery from SPoRT uses the DNB channel for both the red and the green components of the RGB, and then the single channel 11 micron band for the blue component.  So warm, reflective clouds have both red and green and result in a shade of yellow while cold, reflective clouds appear in shades of blue to white.  The image above from 17-February-2014 has a mixture of yellow, blue, and white objects, but the question is: Are all of these areas clouds?  Some of the city lights appear to be distinct, sharp yellow points on the ground with little diffusion of light through clouds even though they are surrounded by shades of yellow.  Notice the area at the intersection of the CO, WY, and NE borders as well as some of the inter-mountain regions of western Colorado and how the city lights in these regions are not blocked, nor spread over a large area due to scattering by the clouds.

The Nighttime Microphysics RGB imagery from VIIRS is provided above as a comparison to the DNB.  Using this RGB one can identify areas of clouds and their type.  Several of the areas in question turn out to be surface features as opposed to clouds.  This realization that clouds do not exist in some of the yellow shaded areas of the DNB as well as the fact that city lights are not scattered in these regions, leads one to conclude that the DNB is showing snow on the ground.  Several areas are labeled as “Snow Cover”.  However, note that some clouds do exist.  In fact some low clouds in the inter-mountain west of Colorado are evident in yellowish-green tones, and low- and mid-level clouds are highlighted in northwest Kansas and northeastern Colorado.  The Nighttime Microphysics RGB also hints at the potential of fog in southeast Colorado with dull gray to shades of aqua.  Perhaps snow cover has melted to some extent to provide a moist ground with clear skies overnight that resulted in some very thin, to scattered fog or low clouds. Below are images of the same time but over a wider area in order to provide greater perspective.  Note that much of the yellow shaded areas in the DNB RGB are the result of snow cover vs low cloud features.  Hence VIIRS demonstrates valuable insight to both clouds and surface features at night via reflected moonlight.

VIIRS Nighttime Microphysics RGB within AWIPS/D2d for 17 February 2014 at 0905 UTC over the western U.S. 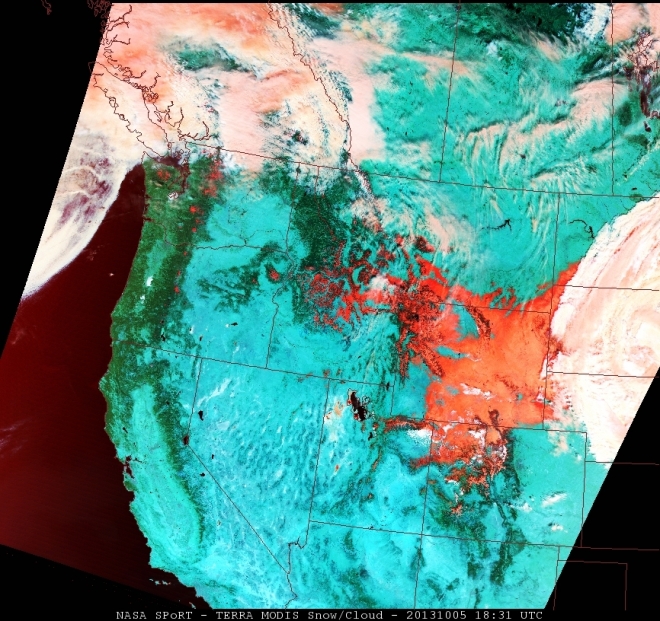 The early season snow storm across the Front Range had both large amounts and a large area of snow coverage.  With the sub-surface temperatures still relatively warm at this point and an early fall sun angle, the MODIS and VIIRS Snow-Cloud RGB imagery provides a 1km resolution look at the snow cover and subsequent melt from image to image.  The series of 4 images here spans the afternoon from 1830-200 UTC and changes in the snow cover can be seen even with just an hour or two different between images. While the view here is a large domain (via SPoRT website), users receiving data from SPoRT can use their AWIPS/D2d systems to view a more mesoscale region.  Even at this wide view the increase in bare ground (more aqua coloring) in southeast WY is apparent.  And, parts of the snow cover (red coloring) in western WY and northwest CO could also be seen decreasing.  Even southern MT shows changes in snow cover.  Compare the 1831 UTC MODIS image and the 2102 VIIRS image to more easily see the overall change. Monitoring of the snow cover change has been applied to potential flood forecasts, given the depth of snow is relatively known. 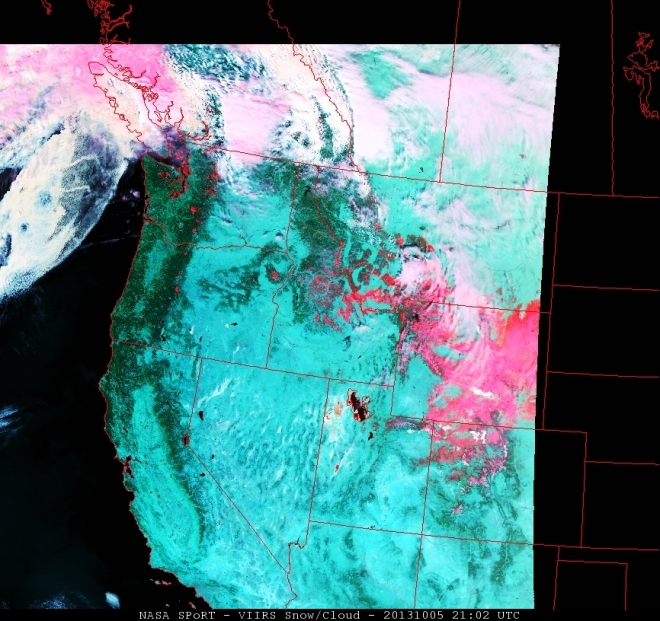 Back to back storm systems hit New Mexico during the last week of January.  The first storm system was quite warm, and only brought snowfall to the highest terrain, however the second system was much colder and dropped snow levels to the valley floor. Snow-Cloud RGB and True Color RGB imagery captured some interesting features after the clouds cleared following the event.

During the second storm, a back door cold front dropped into the eastern plains of New Mexico and a band of moderate snow set up just behind the front. As the front surged out ahead of the front after sunset, the band of snow was orphaned near the I-40 corridor across the eastern plains.

Perhaps more interestingly, while the band of snow was  occurring across the plains, isolated snow showers were developing across western New Mexico. These showers were moving very quickly to the southeast.  Though they did not look strong on radar, the satellite imagery suggests there were some small accumulations with these showers.  On both the Snow-Cloud and True Color RGB imagery, these showers left “snow streaks” – or linear bands of snow – across the west.  One particular streak extends from near the Four Corners to near I-40!  Several other snow streaks are noted across the west central and southwest mountains, but are not quite as obvious due to other higher elevation snow on the ground. 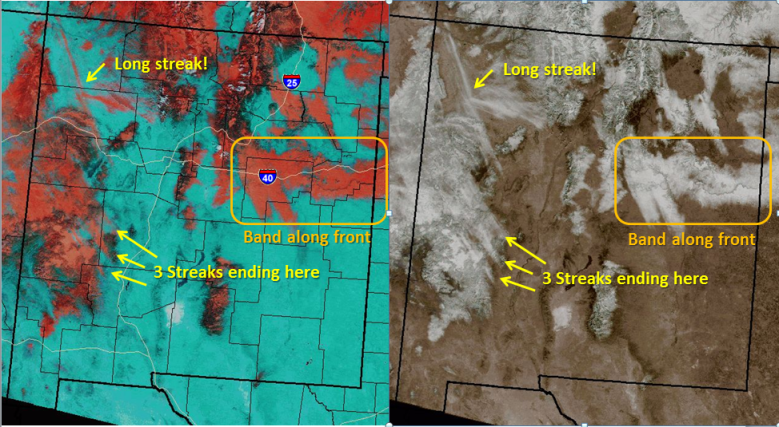 From the traditional GOES satellite imagery used to monitor atmospheric and surface characteristics over a given region, clouds are difficult to distinguish from snow on the ground because of the similarity in the  albedo of these features at visible wavelengths.  However, the multispectral channels on the MODIS scanner, aboard the NASA Terra and Aqua satellites, have the ability to differentiate  between clouds and snow on the ground because these channels are sensitive to the albedo difference between snow and clouds at near-infrared wavelengths.  The figure below demonstrates this capability for the recent snow storm in the Tennessee River Valley.  In the image, clouds remain white, while snow on the ground is designated  by various shades of red.

MODIS false color snow image from January 31, 2010 at 1919UTC differentiating clouds from snow on the ground.

The MODIS False Color imagery produced by SPoRT utilizes one visible and two infrared channels in order to highlight areas where these signatures differ for a particlar phenomena, in this case, snowfall over the Dakotas and eastern Montana.  Prior to the storm, the MODIS False Color product shows snow free conditions in Montana, Wyoming, western South Dakota (with the exception of the Black Hills) and the panhandle of Nebraska.  Following the storm, the MODIS imagery provides a clear separation of cloud cover and snow across these regions, details that may be missed if only a visible image were used, as clouds and snow both appear white.  Furthermore, infrared channel imagery during the period did not provide good discrimination between snow and cloud, as the clouds were low in altitude and similar in brightness temperature to the cold land surface below.

Snowfall in this region is being monitored carefully, as widespread flooding is a concern as the region moves into the Spring season, where rapid snow melt and additional liquid precipitation are likely.  Previously, MODIS False Color data have been used by the Great Falls, MT office of the National Weather Service to support hydrologic monitoring. 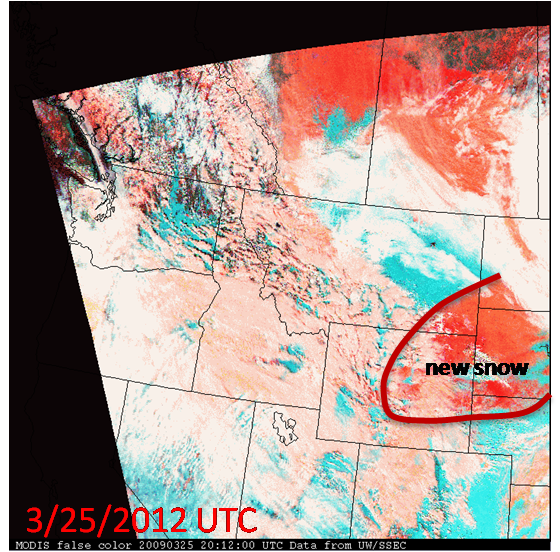